How the “Little Guy” Survives in the Video Game Marketplace

It’s a virtual “David vs. Goliath” story. A tale that can be told about almost any retail marketplace when larger, more diversified and better funded entities crush those once beloved “mom and pop” locations so many of us hold so dear. The same thing can be said about the ever changing world of the video game marketplace. An industry that generated over 23.5 billion dollars in the United States in 2015 (per the Entertainment Software Association) and one that is dominated by mass market retailers such as Amazon, Best Buy, Walmart and Gamestop with both brick and mortar or online locations.

Adding on to that are the increasing numbers of individuals shying away from purchasing standard physical games in favor of digital gaming purchases off the Nintendo, Playstation and Xbox consoles along with Personal Computers with gaming websites such as Steam, Playstation Network, Xbox Live, Virtual Console, Origin and Good Ol’ Games leading the way.  Even smartphones have access to hundreds of thousands of apps either pay or “free to play” being available for download with just a touch of the finger. In fact digital purchases have outpaced their physical counterparts in many areas of the world with the United States alone generating over 720 million dollars in sales in February of this year (per Statista). It was not too long ago the video game industry centered itself around small local stores which provided consumers easy access and a custom shopping experience.

So just what happened to those stores and if they’re still around how are the able to survive? Being based in Las Vegas, a closer look was needed to find out how a couple of the dwindling number of independent game shops across North America actually conduct their business in order to to find their way through in this hotly contested marketplace. This is a look at one of those stores…

One look at Retro City Games based in the connected city of Henderson and immediately it doesn’t take a rocket scientist to figure out exactly the motives of the store. With decades old arcade machines sending their regards as one makes their way through the entrance, it is easy to see the determined commitment the store has on trying to generate revenue solely through video gaming related means. 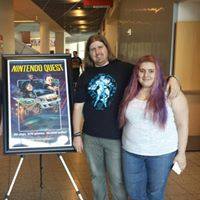 Even when you speak to Doug Haughaboo or Nichole Ghougasian, the store’s owners, it is clear he has definite opinions on how other stores operate, their focus on gaming and why he thinks Retro City Games will succeed. He stated, “Well I think that’s the monotony of the ‘corporate experience’, we’re not fitting into any one mold…it’s all about the interaction (with the community) and having fun.” With regularly scheduled gaming nights and appearances at gaming shows such as the LVL Up Expo, Mini-Con and the GameOn Expo that they notify followers in advance via their social networking sites the attempt to reach out to that community is there but do they have the in store experience to back it up?

While the aesthetics of the store are decidedly different from your local Gamestop, the store itself embraces that “old school” feel. Retro gamers would feel most welcome with an arrangement of titles that lends itself up for a stay much longer than the majority of its competitors. Finding that elusive game from one’s past may require a bit more searching than in other stores but as Doug puts it, “that’s part of the fun, (think of it) like a treasure hunt” but in this case the treasure is digging up some quality video game diamonds in the rough. Their commitment to being video game centric is admirable and to this point it has worked for Retro City Games. “We don’t want to venture outside of what we know best.” Doug added. “(Other stores) may choose to do that but (staying reliant on video game sales) has worked very well for us so far.”

Indeed it has as the store passed an important milestone as it recently celebrated its first anniversary. Whether it was during the celebration itself or the day after when the dust had settled, the importance of this achievement was not lost on Doug nor on Nichole. “It’s just a great feeling to be a part of something so special” Nichole said “I can’t wait to see what’s in store for us.” Nichole always has gone out her way to thank everyone for being a part of the customer base, whether they are there to buy, sell or just hang out and play video games on one of the regular “game nights” they always have planned. My conversations with both of them over these past months on their love of gaming and their video game preferences have left me personally with the impression that this is their passion and that they both have the knowledge to back it up.

When asked Doug realizes also how grateful they are for their ever growing fan base. “(Nichole and I) have worked for businesses that have not seen its share of success.” He added “We opened the doors here at Retro City Games on the first day and had a (paying) customer come in within the first ten minutes. From there it’s been a great time.” It has been a great time for those still seeking a place dedicated to basing its prospects on our love for video game nostalgia. A place that in this age of the video game marketplace, is becoming a lot more difficult to find. But what about a location that is looking to try and cater to both the video game hardcore and trading card audience? Our look at a location next time has a store undergoing that difficult transition of trying to hold onto its previous identity yet welcome those who venture into a different type of gaming.

(originally posted in yourgamesource.com, the story has been modified with current video game sales data.)