Aaero: A Breath of Fresh Air for a Dying(?) Genre

Video games and music aren’t always the best companions. Sure, you have to have an excellent soundtrack to make a game successful, especially in the case of role-playing games and anything with a stunning open world or back story that digs into the philosophies of mankind’s origins as Mass Effect and Halo do. However, on the opposite side of that coin are games that don’t so much need music to be good, but instead rely on it to exist. Thus you have your Guitar Heroes, Rock Bands, DJ Heroes, etc. And when those games were new, yeah they were fun. Who wouldn’t want to sit in their living room with their pals, rocking out on plastic instruments to songs they didn’t know they liked? But if this genre of video games has proven anything, it’s that there really is such thing as too much of a good thing. The gap between well produced, original, creative music games and the infinite number of cell phone motion games is a wasteland that many thought would never see water . . . until now.

In a genre that has grown stagnant, Aaero (Mad Fellows, Reverb Triple XP MSRP $14.99) is a breath of fresh air. Mad Fellows has succeeded in something that many of have failed at. They’ve created a music game that’s visually stunning, original and actually fun to play. Who would have thought we’d ever see something like that again? At first glance, the game is somewhat reminiscent of old arcade games that required you to follow a path in a moving ship while avoiding potential hazards. Once the nostalgia has worn off the music takes control.

As mentioned above, the visuals are the most appealing aspect of the game. The way that it was designed with the simple animation styles of Borderlands and other games of that type mixed with arcade flyers makes it so it’s never difficult to look at. If anything it makes it more difficult to look away. Then there’s the music aspect. Imagine Guitar Hero without the fret board, and instead of remaining stationary, the lines move all while waves of enemies are flying at you. While that might sound difficult, the controls are surprisingly simple, and you don’t have to worry about changing camera angles or displays because it does it automatically with the music. And let’s talk about the music. Much like the music genre in gaming, dubstep has become every music enthusiast’s hobby and has almost oversaturated the market thanks to home brewed tunes and modern technology. While not all dubstep is bad, there certainly is a lot of it out there that isn’t good. However, you don’t need to fear the soundtrack selection with this game. It has a few lemons but for the most part, the music is really good, and when that bass drops, the intensity level rises, immersing you in a post-apocalyptic world full of dazzling jet streams and things that want you dead. 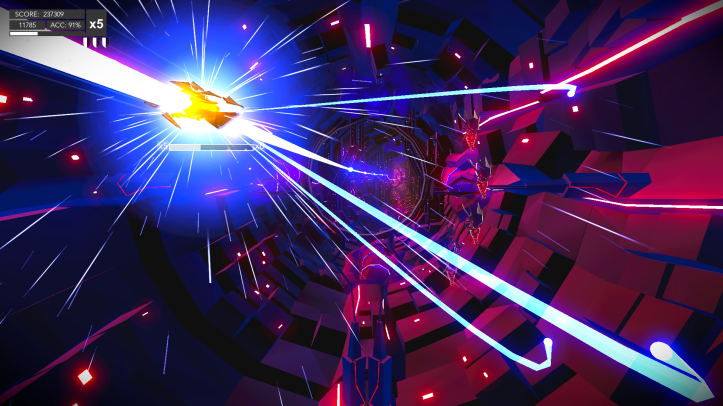 As a reviewer, this is always the most difficult section, especially in the case of games that don’t have a lot of negative things in them. While Aaero is a unique and stunning game, it does have a few flaws. For example, there is a noticeable frame rate drop when in combat. It’s not frequent, but it does happen. There are also some parts where the music and combat don’t exactly match up, which can be somewhat of a problem for a game that’s designed around those two specific components. Finally, it does get slightly repetitive. It’s like the first time you go to Disneyland and everything feels so magical. Then you buy an annual pass and suddenly it just becomes another place filled with people that you’d like to avoid at all costs. That’s not to say that that’s what’s going to happen with Aaero, because once you start playing it, it’s hard to put the controller down. However, there isn’t a whole lot of replay value to the game, unless of course, Mad Fellows has some DLC planned, which is possible. 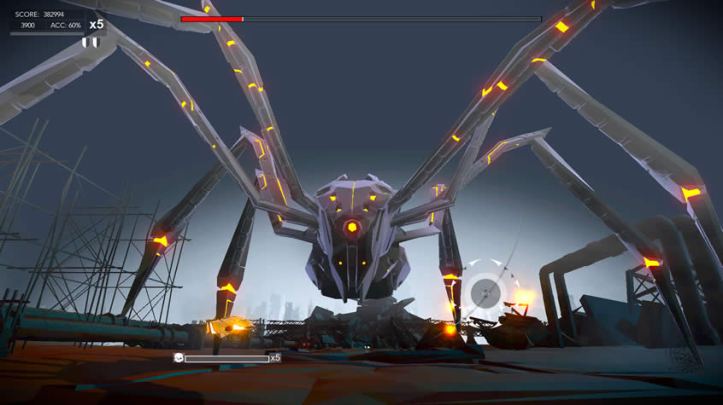 As a reviewer, I try to play every game from start to finish, but it isn’t always easy, nor is it accomplishable. However, with Aaero the story is a little different. It was refreshing and fun. Everything from the music to the gameplay, which was built around the music is entrancing in their own ways. It’s like watching Tron or staring at one of those screen savers with the fish on them. If you’re focus impaired like I tend to be, it’s not only great exercise for the senses, but it’s captivating and fun to look at, as well. If you’re a fan of a electronica, dubstep (they might be the same thing), flying games or arcade style shooters, this is worth the fifteen dollar price tag. The game itself can take anywhere from eight to ten hours. Hopefully Mad Fellows will put out some DLC, but if you’re looking for something new and exciting, Aaero is a healthy mixture of both.

(Please note that for this review, Pop Culture Cosmos did receive a review code/model  from the Public Relations Firm, Developer and/or Publisher responsible for distribution to the press.)