Battle Princess Madelyn is the most frustrating game I have ever played. It is also, one of the most satisfying games I’ve ever played. In a cyclical world, where platformers are once again starting to oversaturate the market, Battle Princess Madelyn stands about as tall as the dancing skeleton you face within minutes of starting the game. And trust me, it’s a fight you won’t soon forget. Why does this game stand out? If you’ve played any of the indie platforming games that have come out in the past few years, you know that they’re notorious for being punishing. Not that there’s anything wrong with that. Let’s not forget that these types of games are products inspired by the retro games of the ’80s and ’90s, a time when you actually had to be good at video games to play them. What separates Battle Princess Madelyn (Casual Bit Games, MSRP $19.99) from other retro-inspired games of this era is the way in which it embraces its heritage in gameplay, story, and soundtrack. It feels right at home on your console, just as it would in an arcade in the corner of some dingy pizza place.
Battle Princess Madelyn tells the story of a princess who becomes a warrior and takes on hordes of the undead in order to save the kingdom where she lives. Aided by the ghost of her dog, Fritzy, and the wisdom of her grandfather, she travels across swamps, mountains, castles and dungeons until she reaches that final confrontation that games like this are known for. Nostalgic gameplay isn’t the only thing that drives the narrative forward. The moment you turn the game on, you’re greeted by a slightly different version of a scene that every ’80s kid knows all too well. Let me paint a picture in your mind. A certain sick child is lying in bed playing video games, when grandpa comes over and offers to read a story. The sick child being as “savage” as he is, tells his grandpa that books are dumb. “Not this book,” the grandpa assures him, as he opens it up and tells a tale of a princess, a masked man, a giant, and a Sicilian. If you haven’t put it together yet, the sick child is Fred Savage and the book the grandpa is reading is the Princess Bride. That’s right, the good folks over at Casual Bit Games open their tale with a sick girl named Madelyn playing a video game on an iPad, when her grandfather comes over and offers to read a story. At first, she’s not interested, then she finds out the main character is named Madelyn, and into the game you go. A clever and appreciated nod to pop culture gone by.
Before I dig into what I did and didn’t like about the game, let me make it clear that I’m not a fan of platforming games. I have played more than I can count, and with the exception of Celeste, I’ve never been completely enamored by one. While Battle Princess Madelyn certainly stands out, I’m still not exactly sure how I felt about it. Was the payoff worth the frustration? Yes, and no. Like all things that you fail at repeatedly, finally getting it right makes you feel you like you can do anything. In the case of Battle Princess Madelyn, that feeling only lasts until whatever comes next. Each enemy type is as unforgiving and frustrating as the next, and it certainly doesn’t help that the controls on the Xbox One felt unresponsive, which can make or break you in a game that requires quick thinking and even quicker reflexes. I lost count of how many times I died because the game didn’t register the command fast enough, or it might be the way that every move you make in this game has to be perfect. We’ll dig more into that in a minute.

As for things I liked about the game, I have to take my hat off to Casual Bit Games for really pushing the Unity engine to places I’ve never seen it go. Yeah, there have been some big titles created by AAA studios using the Unity engine like Assassin’s Creed: Identity, Deus Ex: The Fall, and the ever popular Temple Run, but while those games had their entertaining aspects, there wasn’t exactly anything about them (with the exception of being connected to bigger franchises) that made you stand back and go, “wow.” In Battle Princess Madelyn, when you’re not focused on not dying, the visuals leave you in a state of awe that makes you want to see how much this world has to offer. Everything from the color shades to the way things glow and cast shadows is beautifully rendered in an environment that feels three dimensional without actually being three dimensional.
I do want to get back to the nostalgia this game brings. Again, the video game market of today (especially the indie scene) is oversaturated with platforming games. I admire the effort it takes to develop a game, whether it’s good or bad, but with so many developers claiming to have “reinvented the wheel,” it’s hard to know what games you should spend your time exploring. Battle Princess Madelyn is definitely a game worth exploring. For those of you who grew up in the ’80s and early ’90s this will, no doubt, bring back memories of the time you might have spent in arcades. If you missed that era like I did, it might bring back memories of games like Ghouls and Ghosts, Golden Axe, or one of the many Gauntlet games you played with your buddies on the Super Nintendo or Sega Genesis growing up. Not only does it feel like a game from days gone by, but it also manages to feel new, bringing aspects of modern RPGs to the classic side-scrolling gameplay. For example, you can go into buildings, speak with townspeople (some of whom even offer you side-quests), change equipment and fast travel. The people in the towns even incentivize you to progress in the game by offering you rewards for defeating bosses. As for the story, I would consider it a violent fairy tale, one that kicks off with the death of a dog, and if you’re like me, you would gladly avenge any poor pup harmed by another being, especially an evil one. It’s a sad way to start the narrative, but it has a motivating effect that makes you determined to play the game from start to finish. 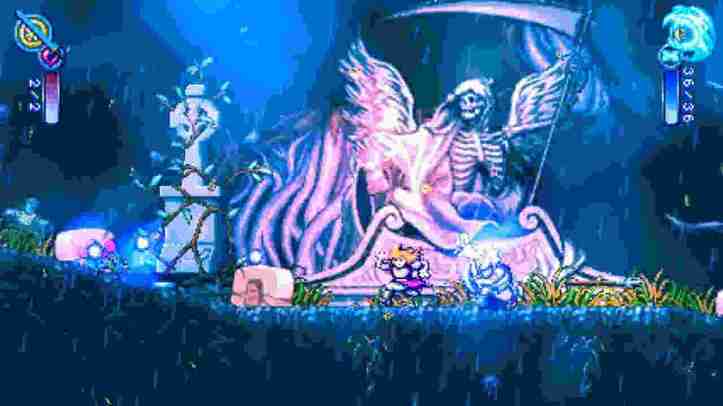 On the flipside of critic coin, there was plenty that I didn’t like about this game. One of those things being that the gameplay feels like it punishes you just for the sake of punishing you. As I mentioned above, everything has to be perfect. Every jump has to be hit in an exact place, every enemy has a routine, every dodge has to be timed. There’s no room for error in this game. And unlike most bigger titles, you can’t adjust the difficulty and play the game at a level that allows you to just enjoy it. Not that that’s a bad thing. Games need to be challenging, but there are points in Battle Princess Madelyn where challenging straddles the line of impossibility. The lack of checkpoints becomes an issue, as well in certain places. If you like to explore, you can easily find yourself in places that were ridiculously hard to get to, and then you die on the way back. The only problem is that when you’re resurrected, you end up in the same spot you died, instead of back in a town or village, placing you in an endless loop of madness.
My last complaint is the respawn system. Again, I realize that platforming games are supposed to be challenging, but a simple change to this system could make the game a lot more enjoyable. The way it works is that each time you kill an enemy, you collect an orb from them, and those orbs allow you to keep coming back to life when you die. Those orbs fill a gauge on the top right corner of your screen, and when it’s full you can usually return from the dead three times. The issue I have is that, once the gauge is depleted, it takes so many orbs to fill it back up, and in a game like this, the chances are high that you’re going to die before you’re able to gather enough orbs for even one more respawn. Then there are things that are instant deaths. For example, anytime you don’t time a jump properly, you’re going to die. If you get caught by one of the mud hands that are in the swamp, you’re going to die. There are a few other things that cause instant death, as well, but you get the picture.

Back to my earlier question: Is the payoff worth the frustration that this game causes you. Looking back at it now, I think it is. I remember playing 2D platforming games as a kid, and that feeling that you get after spending hours trying to pass a level or beating a boss is unlike anything you experience for the rest of your life. Though Battle Princess Madelyn is incredibly difficult, the feeling you get as you’re nearing the end of each level and boss fight, and the way the music speeds up, and your heart feels like it’s going to leap out of your chest, is something I haven’t experienced in a long time. The story is intriguing, the color shading is beautiful, the animation is without flaw, and the game is incredibly difficult. I’d say that hitting three of those four marks makes this game worth the $19.99 it costs to play it. While the game has been delayed on Nintendo Switch and (I think) Playstation 4, you can pick it up on the Xbox Marketplace and on Steam today.